The PTA1624 is an automatic pre-stretched turntable wrapper based on the Semi-Auto  Pallet Wrapper PTP1624. This device is used to automatically cut he film connection after finishing wrap and clamp the tail film for the next pallet wrapping. This design provides greater convenience for the operator. It only needs to be loaded, press the start button, and other tasks are automatically completed by the device. In addition, we also added an Option, remote control, remotely start the device directly after loading, no need to go to operation platform.

2 Turntable &base
Go home position after wrap cycle finished
Soft start/soft stop
Heavy duty chain drive
With the forklift portable at both the front& rear of the base. 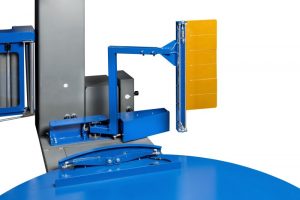